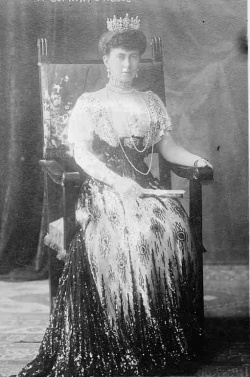 She was born in Potsdam, Germany in 1870 to Crown Prince Friederich and Princess Victoria, Princess Royal.

On October 27, 1889, she married Crown Prince Constantine of Greece in Athens, Greece. They had six children:

She left Greece on June 11, 1917 with her husband (who abdicated because of his pro-German sentiments) and they went into exile to Switzerland.

Restored to the throne in November of 1920, the royal couple again went into exile - this time in Italy - after the Asia Minor Disaster of 1922.

Queen Sophie died of cancer in Frankfurt, Germany in 1932. She was buried in Italy. In 1936, she was reburied in Tatoi, Athens.