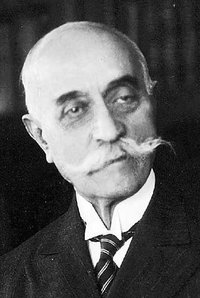 Pavlos Kountouriotis was a Greek admiral and politician.

Kountouriotis was born in Hydra on April 9, 1855, a member of a leading family of that island which produced naval heroes in the Greek War of Independence. His grandfather, Georgios Kountouriotis, had served as Prime Minister of Greece in 1848.

Kountouriotis enlisted in the Greek Navy and distinguished himself in the Greco-Turkish War (1897). In 1900, he captained the war ship "Miaoulis" across the Atlantic to America - the first Greek Navy captain to do so.

During the First Balkan War, he was made commander of the Aegean fleet, defeating the Turks at Cape Helle and at Limnos and liberating the islands of Limnos, Thassos, Samothrace, Psara, Imvros and Lesbos.

He followed Eleftherios Venizelos to Thessaloniki during the first World War and, after the ouster of King Constantine I, became Minister of the Navy in Venizelos' cabinet. In 1920, Venizelos was defeated in the elections by the Laiko (Popular) Party and Kountouriotis resigned from the military.

On April 14, 1924, following the Asia Minor disaster, King George II was ousted, Greece was proclaimed a Republic and Pavlos Kountouriotis was named President - the first in Greek history. Two year later he resigned because of Pangalos' dictatorship but returned after the dicatorship fell. Kountouriotis was elected President in 1929 but had to resign towards the end of that year for health reasons.