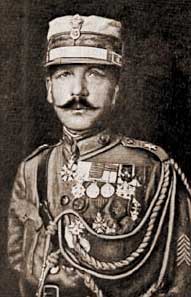 Pangalos graduated first in his class from the Scholi Evelpidon Military Academy in 1900, and continued his studies in Paris, France. In 1916 he supported Eleftherios Venizelos in his struggle against King Constantine I, and was rewarded with a senior position in the War Ministry. He was demoted after Constantine returned to power in 1920; in 1923 Pangalos supported the coup d'etat by Nikolaos Plastiras which abolished the monarchy and declared the 1st Hellenic Republic. His first job was to prosecute a number of prominent pro-monarchists which resulted in 6 executions; he then rushed to Thessaloniki, from where he successfully reorganized the Greek army in Macedonia and Thrace, as a Turkish attack in the region was feared to be imminent.

A staunch nationalist, Pangalos objected to the terms of the Treaty of Lausanne, and declared that his troops would attack Turkey in order to block the deal. He was forced to resign, but his stance made him popular with the many segments of Greek society that objected to the treaty. During the period of political instability that followed, Pangalos jumped into the fray, gaining and losing a number of ministerial positions as governments came and went.

On June 24, 1925, officers loyal to Pangalos, fearing that the political instability was putting the country at risk, overthrew the government in a coup. Pangalos immediately abolished the republic and began to prosecute anyone who could possibly challenge his authority, including his old boss, Nikolaos Plastiras. Freedom of the press was abolished, and a number of repressive laws were enacted (including a law dictating the length of women's skirts - no more than 30cm above the ground).

Soon, many of the officers that had helped him come to power decided that he had to be removed. On August 24, 1926, a counter-coup deposed him and Pavlos Kountouriotis returned as President.

Pangalos remained in prison for 2 years and was released during a period when a number of amnesties were given by Venizelos. He never regained the popular support he had before the coup, and never again played a role in Greek politics. He unsuccessfully ran for parliament in 1950 (on a nationalist/anti-communist platform) and died 2 years later.

His grandson, also named Theodoros Pangalos, is currently a member of the Greek parliament and a former minister of Foreign Affairs. Ironically, he is a member of the PASOK socialist party.