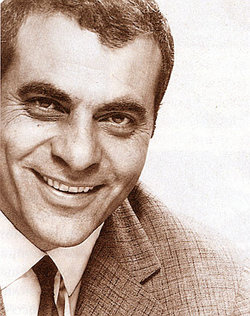 Stelios Kazantzidis, one of Greece's most popular singers.

Born August 29, 1931 in Nea Ionia, Athens, Greece to refugees from the Pontus region of Asia Minor. His father died when he was 14, forcing him to work at odd jobs in order for him to support his family.

As a young boy, his life was full of difficult times. As a teenager he worked as a baggage handler in Athens Omonia Square, sold roasted chestnuts at the open market (laiki agora) and worked as a laborer at the New Ionia textile mills.

He also served in the military on Makronissos island.

His life changed after his military service when the owner of a factory in the Perissos working district gave him a guitar. He spend hours playing and channeled his feelings into music. He mainly sung about the difficulties of the hardworking factory workers and the Greek people who were forced to emigrate abroad to seek a living.

Kazantzidis made his first nightclub appearance in the early 1950s in Kifissia. In 1952 he made his first studio recording, covering a song by the famous composer Apostolos Kaldaras, titled Gia Banio Pao (Για μπάνιο πάω). This first song did not enjoy any success, unlike the second recorded song Den Thelo to Kako sou (Δεν θέλω το κακό σου), written by Yiannis Papaioannou which became a great success. A great more successful recordings followed after that.

In 1957, he met Marinella in Thessaloniki and they become an artistic couple. 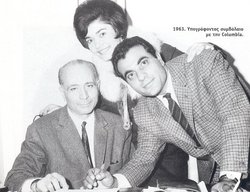 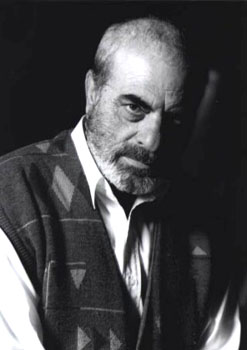 In a more recent photo

In January of 1964 he left Columbia Records to sign with Minos Matsas' Odeon-Parlophon. In July of the same year he married Marinella.

Throughout his career he worked with some of the best known composers in Greece, including Manolis Chiotis, Giorgos Mitsakis, Vassilis Tsitsanis, Manos Loizos, Manos Hadjidakis, Mikis Theodorakis and Stavros Xarhakos.

He abandoned the nightclub scene and stopped making live appearances in 1965. During his career he released over 120 albums. He stopped recording in 1976 and spend his time fishing which was his favorite hobby. He said he felt freedom and tranquility fishing with his friends.

He was diagnosed with lung cancer in April 2001 and was hospitalized at the Athens Medical Center. He received treatment in Germany before returning to the hospital in Athens. He passed away at the age of 70 on September 14, 2001