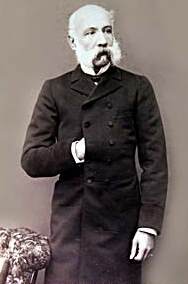 He was born at Kalavryta, Achaea prefecture, Peloponnesus. He studied law at Athens, and in 1843 entered the ministry of the interior, of which department he became permanent secretary in 1859. In 1862, on the deposition of King Otto, he became minister for foreign affairs in the provisional government. In 1867 he was minister at Paris. On his return to Athens he became a member of successive cabinets in various capacities, and rapidly collected a party around him consisting of those who opposed his great rival, Charilaos Trikoupis.

In the so-called Oecumenical Ministry of 1877 he voted for war with Turkey, and on its fall he entered the cabinet of Koumoundouros as minister for foreign affairs. He was a representative of Greece at the Berlin Congress in 1878. From this time forward, and particularly after 1882, when Trikoupis again came into power at the head of a strong party, the duel between these two statesmen was the leading feature of Greek politics.

Deligiannis first formed a cabinet in 1885; but his warlike policy, the aim of which was, by threatening Turkey, to force the powers to make concessions in order to avoid the risk of a European war, ended in failure. For the powers, in order to stop his excessive armaments, eventually blockaded the Piraeus and other ports, and this brought about his downfall. He returned to power in 1890, with a radical programme, but his failure to deal with the financial crisis produced a conflict between him and the king, and his disrespectful attitude resulted in his summary dismissal in 1892. Deligiannis, by his demagogic behaviour, evidently expected the public to side with him; but at the elections he was badly beaten.

In 1895, however, he again became prime minister, and was at the head of affairs during the Cretan crisis and the opening of the war with Turkey in 1897. The humiliating defeat which ensued though Deligiannis himself had been led into the disastrous war policy to some extent against his will caused his fall in April 1897, the king again dismissing him from office when he declined to resign. Deligiannis kept his own seat at the election of 1899, but his following dwindled to small dimensions. He quickly recovered his influence, however, and he was again president of the council and minister of the interior when, on the 13th of June 1905, he was murdered, by a gambler, in revenge for the rigorous measures taken by him against gambling houses.

His death was the occasion for an extraordinary demonstration of popular grief. He died in extreme poverty, and a pension was voted to the two nieces who lived with him.