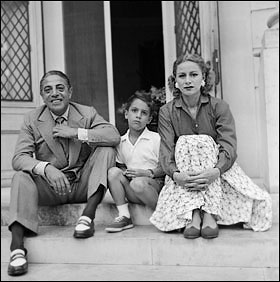 Tina with her husband Aristotle Onassis and their elder child Alexander

Athina Mary "Tina" Livanos March 19, 1926 - October 10, 1974) was the daughter of the Greek shipping magnate Stavros Livanos and wife of Aristotle Onassis, whom she married at age 20 (he was 40). She held dual citizenship between Greece and America.

She was married three times:

She died suddenly in Paris in 1974. Foul play had been suspected at the time as her body was covered in bruises but Niarchos was subsequently cleared by an investigation.