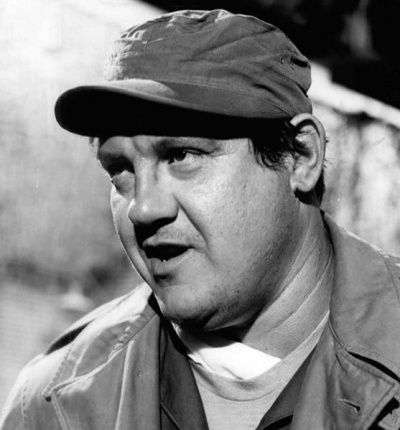 Photo of Alex Karras as a guest star on the television program M*A*S*H.

Alexander George Karras, (born July 15, 1935 in Gary, Indiana; died October 10, 2012 in Los Angeles) was a Greek American American football player and actor who was best known for playing with the National Football League's Detroit Lions from 1958-1962 and 1964-1971. In addition, non-sports fans will recall his role on the ABC sitcom Webster, alongside real-life wife Susan Clark, as the titular character's adoptive father.

Alex Karras was the son of Dr. George Karras, a Greek immigrant who graduated from Chicago and got his medical degree in Canada. There, George Karras met and married a Canadian woman, Alex's mother. George Karras opened a medical practice in Gary, Indiana, but he died when Alex was 13 years old. By that time, Alex Karras had learned to play football in a parking lot near his home, and he blossomed into a four-time Indiana all-state selection at Gary Emerson High School.

Almost every major college sought to enroll Karras in 1954. His older brother, Teddy, had played at Purdue but later transferred to Indiana. Because of this, Alex said, "Indiana had the inside track" on recruiting him, but shortly after he graduated high school, several coaches from the University of Iowa took Karras up to Spencer, Iowa, and convinced him to sign with the Hawkeyes. The coaches had taken Karras to secluded Spencer to keep him away from rival recruiters.

Karras struggled his first few years at Iowa, both with homesickness and with his coach, Forest Evashevski. Alex probably would have left Iowa had he not befriended a Greek theater owner, as well as fellow players Cal Jones and Bob Commings. Karras' sophomore year with Iowa in 1955 got off to a rocky start when he showed up for practice twenty pounds overweight. Karras was also hampered that season by a cracked ankle bone. After being disappointed at not getting to play in the season finale, Karras threw a shoe at Evaskevski and quit the team. Karras did not earn a football letter for the 1955 season. Karras said, "I was through at Iowa...in more ways than one. The football staff was disgusted with me, my grades were in terrible shape because I was flunking half my courses, and I was convinced I wanted no more of Iowa. When I went home and told my mother I was quitting, she told me if I gave up I'd be giving up easily the rest of my life. She convinced me I should go back and try again."

Karras went to summer classes and whipped his body and grades into shape. He rejoined the football team, but a strained relationship resurfaced. Evashevski promised to start Alex Karras in the 1956 season opener against Indiana, when Alex would square off against his brother, Teddy. But Evy played Karras off of the bench instead, and Karras quit the team again. This time, he agreed to rejoin the team only after making Evashevski promise he would not talk to Karras. Iowa took the lead in the 1956 Big Ten title race with a 7-0 victory over Minnesota. Karras, playing what Evashevski called "as great a tackle performance as you would ever want to see", was so exhausted he had to be carried from the field. The Hawkeyes then clinched the Big Ten title and Iowa's first ever Rose Bowl berth by defeating Ohio State, 6-0. Karras sealed the game with a quarterback sack on the game's final play.

Iowa's final regular season game in 1956 was against Notre Dame, which Iowa won, 48-8. Karras called it his most satisfying college win, saying, "The Karrases have always had a rivalry with Notre Dame. The school was just 60 miles down the road from our home and we wanted to beat 'em at anything." However, after the game, Karras got into a physical battle with Evashevski.

Karras did not enjoy his trip to the Rose Bowl, either. "Pasadena was the most boring town I’ve ever been in," said Karras. "Menopause Manor. I remember one guy on the team got a date. It was me, and she was 67 years old. I guess you could call that a highlight." Despite his bad date, Karras helped the Hawkeyes win the 1957 Rose Bowl over Oregon State, 35-19. He was a first team All-American in 1956.

Karras spent the summer of 1957 with an American track team of Greek descent. He participated in the shot put, throwing a respectable 52 feet. In his senior season, Alex Karras was the most dominant lineman in the nation, winning the 1957 Outland Trophy. He also placed second in the voting for the Heisman Trophy, the highest finish ever for a tackle. In addition, Karras was a consensus first team All-American in 1957.

Hawkeye teammate Randy Duncan said, "Karras hated Evashevski, and he still does. I think Karras hated Evy for a lot of reasons. Evy was on everybody's back, and he was on Karras' back big time. Karras was a great football player, but he didn't really like offense and, in those days, you had to go both ways. So he didn't block anybody. What he wanted to do was chase down quarterbacks and play defense. Alex has no good memories of Iowa."

Karras has not returned to Iowa since his playing days. He once remarked, "It's ridiculous for Iowa to try to compete with Ohio State and Michigan in the Big Ten. Those schools have alumni groups that can get them anything they want."

Alex Karras was drafted in the first round by the Detroit Lions in 1958. However, before his NFL career got underway, he signed a contract as a professional wrestler on December 13, 1957, earning $25,000 during the six-month off-season. Eight days later, he officially signed with the Lions, spurning an offer from the Canadian Football League's Winnipeg Blue Bombers.

On January 7, 1963, Karras' ownership in Detroit's Lindell Bar became a source of controversy when league officials urged him to sell his financial interests in the place because of reports of gambling and organized crime influence. After first threatening to retire rather than give it up, Karras admitted placing bets on NFL games and was suspended by the league, along with Green Bay Packers' running back Paul Hornung, for one season (1963).

During his exile, Karras returned to pro wrestling, taking on such memorable characters as Dick the Bruiser, but was then reinstated, along with Hornung, on March 16, 1964 by NFL commissioner Pete Rozelle. Upon returning to action in 1964, Karras once refused when an official asked him to call the pregame coin toss. "I'm sorry, sir," Karras replied. "I'm not permitted to gamble." During his first year back, player discontent with head coach George Wilson resulted in Karras asking to be traded. However, the Lions settled the issue when they fired Wilson after the 1964 NFL season.

After another season of controversy under new head coach Harry Gilmer, Karras was rumored to be ready to play out his option and sign with the expansion Miami Dolphins of the American Football League under his former coach Wilson. Instead, Karras signed a seven-year contract with the Lions on May 20, 1966, with Wilson stating that Karras had used the threat of signing with Miami to garner the large deal with Detroit.

Despite the new contract, controversy remained, as Karras and Gilmer sparred in midseason, with the coach reportedly ready to release the veteran defensive tackle. As before, it would be the coach who would depart, with Karras' former teammate Joe Schmidt taking over.

On June 4, 1967, Karras once again hinted that he would retire in order to work at a new business venture; but once training camp began, Karras was back with the Lions. During that preseason, he jokingly commented that he would walk back from Denver if the AFL Denver Broncos defeated the Lions. When that actually happened, Karras backtracked and flew home on the team plane.

In 1968, Karras figured prominently in the film adaptation of George Plimpton's sports book Paper Lion, playing himself. Three years later, Karras was under consideration for the part of Carlo Rizzi, the duplicitous brother-in-law of the Corleone family, in The Godfather. The role was one of many acting opportunities that developed following his performance in Paper Lion.

Following his release by the Lions in 1971, he began acting on a full-time basis, playing a backwoods boy turned Olympic weightlifter named Hugh Ray Feather in 1973's The 500-Pound Jerk. A minor but memorable role came one year later in the western parody Blazing Saddles: the very strong and very slow-witted thug Mongo, who in one scene knocks out a horse with one punch.

That same year, he was quickly brought in by ABC to replace Fred Williamson as a commentator for the network's Monday Night Football. He served three years in that role until leaving after the 1976 NFL season, with his most memorable comment coming in his first game, when he joked that bald Oakland Raiders' lineman Otis Sistrunk, who never attended college, was from "the University of Mars." Other later roles included as the sheriff (Porky's brother) in Porky's and as western settler Hans Brumbaugh in Centennial. In addition, he also played a bodyguard named "Squash" in the movie Victor/Victoria.

Alex Karras died on October 10, 2012, from complications caused by kidney failure. He was 77 years old.

In conjunction with the 100 years of Hawkeye football celebration in 1989, Iowa Hawkeye fans selected an all-time team. The squad featured eleven players on offense and defense, two kickers, and fifteen special mention players who received strong fan support. Alex Karras was voted to the team as a defensive lineman. Karras was also elected to the College Football Hall of Fame in 1991.