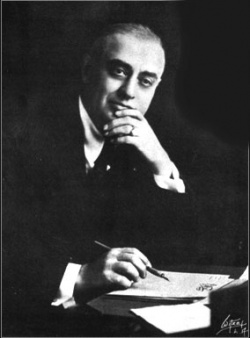 Alexander Pantages, born Pericles Pantages in 1876 on the Greek island of Andros, ran away from home at age nine and served on merchant ships for several years, then worked at various odd jobs including a restaurant in San Francisco.

With his named changed to Alexander (after he heard about Alexander the Great), he reached the gold fields of Skagway and Dawson. In Dawson he met Kate Rockwell, a dance hall girl called Klondike Kate. Both worked at the fancy Savoy Saloon where Kate distracted a customer, and Alex, a waiter, would take away their half-full drink so the miner would have to order again.

Alex lost his job, but he moved in with Kate. Alex persuaded Kate to buy a theater for them to operate together, the Orpheum. Kate became the star attraction and produced her own shows. Alex scheduled various acts and kept the miners happy to spend their gold dust. On their best days Kate and Alex grossed $8,000.

Fires destroyed the Orpheum three times. Then miners left Dawson for the latest strikes in Alaska. Alex and Kate sought better prospects elsewhere. In Seattle Alex opened the Crystal Theater, but Kate had to go on the road performing to pay the bills. She sent love letters and money to Alex as he sent letters with sweet nothings and requests for more money to her. By 1904 he renamed his theater the Pantages. While Kate was away on tour, Alex married a cultured girl named Lois Mendenhall who had performed at his theater.

When Kate learned of Alex's marriage in March, 1905, she fell apart and turned to alcohol. She sued him for breach of promise and accepted a settlement of $5,000. She continued touring until a twisted knee forced her retirement. She and her mother bought some land in Oregon, but Kate was no homesteader. She married in 1915, but it ended in divorce because of her infidelities. After two more marriages Kate died in 1957 at age 81 - after playing her Klondike Kate reputation to the hilt for money and publicity. Hollywood even made a movie about her. 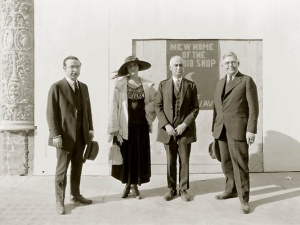 Alex by 1909 began Pantages Theaters all along the Pacific Coast and owned mansions in Seattle and Los Angeles. At the peak of his career in 1926 he owned 30 theaters and controlled 42 more, booking first vaudeville shows and later silent films.

Pantages theaters dominated the market west of the Mississippi in the 1920s with a partnership with a subsidiary of Paramount Pictures doing the distribution of films. Pantages was blocked from the eastern market by the New York based Keith-Albee-Orpheum Circuit (KAO). Partners David Sarnoff and Joseph P. Kennedy (father of President Kennedy) who owned the Radio Corporation of America (RCA) acquired the KAO theaters. By 1928 they changed the name to Radio Keith Orpheum (RKO) and offered to buy out Alexander Pantages. He refused. 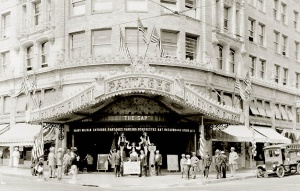 In 1930 Pantages built an Art Deco theater just east of the famous corner of Hollywood and Vine at a cost of $1.25 million. By that time his luck was deserting him. In 1929 a 17-year-old usher and hopeful dancer accused him of rape. He was found guilty and sentenced to 50 years. On appeal he was acquitted, but the fight cost him his fortune and his health. Pantages sold out to the Kennedy/Sarnoff RKO group for $27 million, less than he had first been offered. (Rumors abounded that RKO put the girl up to the rape story.)

Alexander Pantages died February 17, 1936 and was interred in the Great Mausoleum, Sanctuary of Benediction, in the Forest Lawn Memorial Park in Glendale, California.

The Academy Awards began at the Hollywood Pantages Theater in the 1950s, with the first televised show in 1953. Emmy awards were held there until 1977 when legitimate live theater began on the large stage that year. In 2003 owners performed a $10 million facelift. Although the Academy Awards have moved on to other venues, many folks still remember when they and the Pantages seemed synonymous.