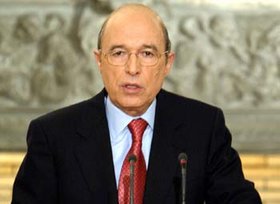 Constantinos Georgiou Simitis (born June 23, 1936), usually known as Costas Simitis, was Prime Minister of Greece and leader of the Panhellenic Socialist Movement (PASOK) from 1996 to 2004.

Costas Simitis was born in Piraeus to George Simitis, Professor at the School of Economic and Commercial Sciences and his wife Fani Christopoulos. He studied Law at the University of Marburg in Germany and economics at the London School of Economics. In 1965 he returned to Greece and was one of the founders of the political research group "Alexandros Papanastasiou." In 1967 this group was transformed into Democratic Defense, an organization opposed to the Greek military regime.

Simitis escaped abroad in order to avoid being jailed and became a member of the Pan-Hellenic Struggle Movement (PAK), while he became a university lecturer in Germany. He returned to Athens in 1974 and was one of the co-founders of PASOK, led by Andreas Papandreou. In 1977 he took up a lecturer's post at the Panteion University.

Although Simitis was not a candidate for the Greek Parliament in the 1981 elections, he was nevertheless appointed Minister for Agriculture in the first PASOK government of that year. Following the 1985 elections, in which he was elected to the Parliament, he became Minister of National Economy; he undertook an unpopular stabilization program, trying to curb inflation and reduce deficits, but resigned his post in 1987 because he felt that his policies were being undermined. In 1993 he took over the Ministry of Commerce and Industry, but in 1995 he again resigned from the ministry and the party's Executive Bureau after a disagreement with Prime Minister Papandreou.

On January 18, 1996 on the resignation of Papandreou through ill-health Simitis was elected Prime Minister, defeating Akis Tsochatzopoulos and Gerasimos Arsenis in a special election, held among the party's parliamentary team. Simitis took office on January 22. However Papandreou remained leader of PASOK for the next several months, until his death, on June 23, just before a party conference would select the party's vice-president; after Papandreou's death, the conference would elect the new Party President. Simitis was elected leader of PASOK on June 30, defeating Akis Tsochatzopoulos) on a policy of support for the European Union.

Simitis then led the party in the national elections of September 22, 1996, gaining a mandate in his own right. He also narrowly won the national election of 2000. Although he was respected throughout Europe, in Greece Simitis was regarded by some Greeks as a rather dull technocrat, lacking the charisma of Papandreou.

Simitis's greatest achievement was overcoming nationalist opposition and severe economic difficulties to get Greece into the Eurozone. However, shortly after Simitis left office in 2004, New Democracy did a financial audit and went on to accuse Simitis' government, of having falsified Greece's macroeconomic statistics, on the basis of which the European institutions accepted Greece to join the Eurozone.

While PASOK traditionalists disliked his move away from orthodox socialism, and also his relative moderation on issues such as the Cyprus dispute and the FYROM name dispute, his supporters saw both of these as positive elements of the 'modernization' movement that Simitis was seen as spearheading.

On January 7 2004 Simitis announced that he would resign as party president and would not be a candidate for prime minister in the next elections. On January 8 he called elections for the position of party president to be held on February 8. He had been Prime Minister of Greece for 8 continuing years, more than anyone else since the fall of Military dictatorship in 1974. He was succeeded as PASOK leader by Giorgos Papandreou, who lost the March 7 elections to the opposition New Democracy party.

Simitis is married to Daphne Arcadiou and has two daughters, Fiona and Marilena.