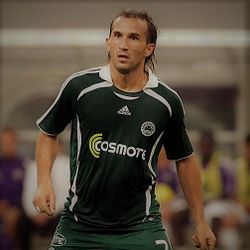 Theofanis Gekas (Greek: Θεοφάνης Γκέκας, born May 23, 1980 in Larissa, Greece) is a retired footballer. He has been very successful being top goalscorer of the Greek League (17 goals) in 2005 and runner-up in 2006 (15 goals). He has also won 78 caps of the Greek National Team, scoring 24 goals which leaves him at #3 on the list of alltime top scorers for the Ethniki. Gekas has been described as a prolific forward with a vision for goal.

Theofanis Gekas started his professional career at his local club AE Larisa FC. (Greek Second Division) After three years there, he moved to Kallithea FC in the summer of 2001. In his first season Kallithea was promoted to the Greek first division. Gekas had scored 30 goals in 87 second division matches.

Gekas kept scoring goals, so the Greek top clubs became interested in him. After scoring 32 goals in 73 matches, Gekas moved to Panathinaikos during the 2005 winter break. At his new club Gekas kept up scoring and became top goal scorer of the Greek league in 2005. (17 goals) He shot into the national squad, where he made his debut in the 2-0 World Cup qualifying victory against Albania in March 2005, despite never having represented the Greek national side at junior level. In the Confederations Cup 2005 Gekas was part of the team of the European champion.

With Panathinaikos, Gekas scored 23 goals in 41 appearances. In the season 2005/2006 Gekas made his debut in the UEFA Champions League and came second in the Greek top goalscorers list. 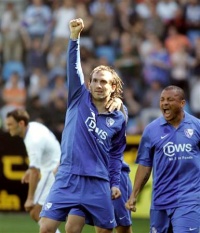 Gekas celebrates a goal for Bochum

The German Second division club VfL Bochum was already interested in Gekas in the spring of 2006, but Panathinaikos wanted 1.5 Million Euro for its forward which was too much money for the German club.

But in the summer of 2006 Panathinaikos signed Greek top scorer Dimitris Salpigidis from PAOK Thessaloniki (One of the reasons was that Gekas didn’t want to sign a long-term contract). As part of the deal Gekas would be transferred to PAOK. But Gekas refused to be transferred to the club. Panathinakos owner Giorgos Vardinogiannis felt personally insulted and loaned Gekas to newly-promoted VfL Bochum for only 300,000 Euro.

VfL Bochum were fighting against relegation that season, but in a short period Gekas became one of the stars of the team and popular among the fans. He scored 20 goals in the league in 30 games and two in the cup. Coach Marcel Koller described him in November 2006 as their "life insurance."

Gekas gathered the second largest number of votes, in a poll of German footballers, for Bundesliga MVP, after Werder Bremen's Diego.