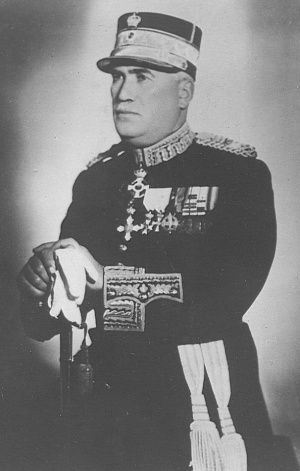 Cavalry General Georgios Stanotas (Greek Γεώργιος Στανωτάς) was born on January 1, 1888 in the village Kastanitsa of Arcadia in Peloponnese. He left his village early and went to Athens looking for a better life. In 1909 he joined the Army as a simple cavalry horseman.

He was clever and bold and soon he was promoted to Non-commissioned Officer. He was an excellent rider and he participated in the Balkan wars 1912-1913, where he went up the ranks quickly due to his brave actions.

In 1914 he graduated from the NCO Academy and was promoted to Second Lieutenant of Cavalry. He participated in the campaigns of 1915-16 and in 1917 he was promoted to Captain.

In the Greek campaign in Asia Minor of 1919-1922 he demonstrated courage and extremely brave actions and initiative, so he received medals and decorations and became well known. He was promoted to Major in 1923. Although in the Cavalry, in 1924 he joined Athens University (Pharmaceutics). In 1927 he was promoted to Lieut. Colonel and was appointed as Cavalry School Commander. In 1929 he took command of the 3rd Cavalry Regiment (in Larissa). In 1930 he was promoted to Colonel and in 1933 he took command of the Cavalry Brigade. He was promoted to Major General in 1938 and was appointed as Cavalry Division Commander (in Thessaloniki) in 1939. In the Greek-Italian war of 1940, the Cavalry Division achieved the first great victory in the Pindos area, defeating the Italian Division “Julia”.

In the spring of 1941, Stanotas with the Cavalry Division fought against the invading Germans in western Macedonia, next to the rest of the Allied Forces. His combat achievements gave him a great reputation among his colleagues. In 1943, he escaped from occupied (by the Axis Forces) Greece and through Turkey and Lebanon, he arrived in Cairo, Egypt, where he joined the rest of the Greek Army. There he was appointed as Inspector General of the Army. He retired in January 1945.

In 1947, when Greece was in the middle of the civil war (communist rebels against the official national government), he was recalled to duty and was appointed as General Commander of Peloponnese. His experience allowed him to organize successful sweep operations and to destroy the main strongholds of the communist rebels. He finally retired in 1948 and received the honorary rank of Lieut. General.

After his military career he pioneered in the plastics industry in Greece. He died on September 25, 1965. Stanotas was an extremely intelligent and brave man, who using only his remarkable abilities managed to survive two world wars and numerous smaller ones and to excel in the battle. He shaped the future of Cavalry in Greece, because based on his experience he developed the organization and structure of today’s Armor units of Greece.