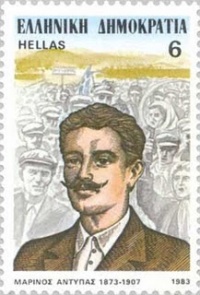 Marinos Antypas was a Greek lawyer, journalist and labour organiser.

Antypas was born in the village Feredinata of Kefalonia in 1872, the son of Spyridon Antypas - a carpenter. He came to Athens to study Law but, instead, became involved with the Central Socialist Society.

He volunteered to fight in the Cretan Revolution of 1896 and was wounded in action. After the failure of the Cretan revolution and the subsequent Greco-Turkish War, he became a staunch anti-Royalist as he blamed the Palace for the failures. On September 14, 1897, he spoke at a rally in Omonia Square, Athens, criticising the King. For this action he was imprisoned for one year on the island of Aegina.

After his release, he returned to Kefalonia where he published the journal "Anastasi" and founded, in Argostoli, the center of social and spiritual questioning "The Equality".

In 1906, he took over the supervision of the farm of his uncle, Gerasimos Skiadaresis, in Thessaly. There, he incited the "koligoi"(farmers) against the "tsiflikades" (large landowners). The landowners, annoyed at his role in the "agrarian problem", had him murdered in Pyrgetos (present-day Rapsani) on March 8, 1907 by paid assassin Ioannis Kyriakou. Kyriakou was subsequently found not guilty of the murder by reason of self-defence even though the unarmed Antypas was fatally shot in the back.

His assassination shocked the farmers and he became quickly a legendary hero and rebel amongst them. His action influenced the great agrarian revolution of Kileler on March 6 of 1910 and the Greek socialists in general.

Antypas was honored on a Greek postage stamp in the 1983 "Personalities" set.