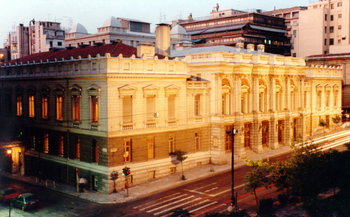 The National Theater was built between 1895 and 1901 in plans made by the German architect Hernest Ziller. It served as the official royal theater for the King's invitees until 1908 when it was given for public use, hence the name by which it was know at the time: Royal Theater.

The original internal installations for the stage facilities, the lighting and heating were among the most sophisticated of the kind for their times, designed by Viennese mechanics and constructed in Piraeus' factories.

Hadrian's Library in Athens served as a model for the structure of the monument's facade which consists of a central part immensely enriched by decorative elements, a Corinthian-style column row and two lateral parts of a typical neo-classical composition. The influence from Renascence buildings is more than evident.

The capital for the construction of the building was almost entirely donated by Stephanos Rallis, a prominent Greek from London, as well as by other members of the Greek community there, like Korialenes and Eugenides. Donations were also given by the Public Endowment Fund, and other sources following various initiatives of King George I.

In 1908, the Royal Theater announced that it is stopping its performances indefinitely. The theatre remains closed, occasionally playing host to foreign theatre companies, until 1932.

In 1924 it was renamed and from Royal Theater was thereafter called National Theater.

On May 30, 1930, the National Theater is founded, under an act of parliament signed by the education minister, Georgios Papandreou. Ioannis Griparis was appointed General Director, and the Permanent Director of Plays is Fotis Politis.

March 19, 1932, the National Theater opens its doors. The first productions are Aeschylus’ Agamemnon and Sublime Dream by Grigorios Xenopoulos. For the next twelve years Kleovoulos Klonis and Antonis Fokas are permanent associates of the theater, designing the sets and costumes respectively.

By a ministerial decree of 1952, the building was identified as "in need of special protection" according to the relevant 1950 Law.

In 1970 a study by the architect M. Perrakis, for the transformation of an experimental convertible theater, was conducted and applied.

Inside the building there have been restorations and the stage installations have been modernized. The facets were also restored and the "New Stage" was remodeled.