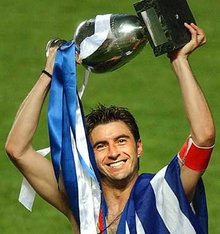 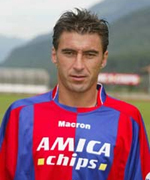 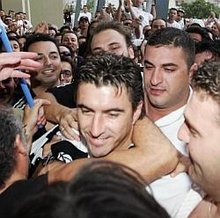 Theo Zagorakis returns home to PAOK in a sea of fans!

A former classic midfield soccer player, Theodoros (Theodore | Θεόδωρος ) Zagorakis (born October 27, 1971 at Lydia, Kavala) was highly influential when his team had possession and was also excellent in closing the opposition down and preventing them from dictating the play.

Theo Zagorakis, who captained Greece to victory at the European Championships in 2004, announced his retirement on Friday, June 15, 2007.

"I feel the time is right to withdraw from active participation," stated the 35-year-old PAOK Thessaloniki midfielder said in a statement posted on the club's Web site.

After his retirement as active footballer Zagorakis did not leave the spotlights. Amongst others he was president at PAOK and member of the European parliament for Nea Dimokratia.

The captain of the Greek national side, Zagorakis made his debut just after the 1994 FIFA World Cup finals, a 5-1 win against the Faroe Islands on September 7. He has played in the qualifying campaigns for three UEFA European Championships and two World Cups, 1998 and 2002.

He became the first Greek player to win more than 100 caps, against Kazakhstan on November 17, 2004, and set a European record for the most consecutive competitive national-team appearances with 57.

He represented Greece in a total of 120 games. Highlighting his commitment and tenacity, Zagorakis never missed an international game due to injury after his debut with Greece and for a 12 year span.

On October 11, 2006, he played his penultimate game with the Greek National Team, a game in which Greece prevailed 4-0 over Bosnia-Herzegovina. "You can't play forever," he said. "You have to know when it's time to quit. I gave everything I had to this team and now I will concentrate on PAOK. I thank God that I kept healthy throughout my career and I was able to achieve great things with the Greek team. I feel blessed."

On August 22, 2007, Zagorakis appeared in Greek uniform for the last time: a friendly held in his honour at Toumba Stadium against Spain.

Zagorakis led by example as Greece eclipsed Spain and Ukraine to top Group 6, playing all eight qualifiers and helping his side to six clean sheets in as many victories and an automatic passage to Portugal.

He was named the Most Valuable Player at UEFA EURO 2004™ after skippering Greece to glory.

After beginning his career with Kavala FC - for whom he scored six goals in 114 league matches - Zagorakis moved to PAOK FC Thessaloniki during the 1992/93 season.

1993: Zagorakis was a firm favourite with supporters at PAOK. He rarely missed a league fixture and often chipped in with important goals, particularly in 1994/95 when he struck four, his best-ever tally.

1997: From there Zagorakis joined Premiership outfit Leicester City FC for a €1.2m fee. Club and player enjoyed an impressively long stay in the English top flight and claimed the League Cup in 1998 and 2000.

2000: Signed for AEK Athens FC in the summer of 2000. Zagorakis took part in all AEK's 26 league games in the 2001/02 season and no team-mate could make the same claim. He also scored three goals in their eight UEFA Cup games, including one in the San Siro stadium against Internazionale FC. The following term was another season of near misses for AEK, who were unbeaten in Europe yet still eliminated at the first hurdle.

2003-04: Amidst AEK's financial turmoil, the Greece captain continued to be as dependable as ever, missing just three Alpha Ethniki matches.

July 21, 2005: Theo Zagorakis, after terminating his contract with Bologna FC signed a two-year deal with PAOK worth approximately 450,000 euros in annual fees, as reports said.

September 2, 2006: Theo Zagorakis announced that the game against Norway [1] (Oct.7, 2006) will be his last game with the Greek National Football Team.

September 7, 2006: Vassilis Gagatsis, the federation boss, said Zagorakis, the all-time record holder for games played with Greece, had made up his mind to step aside. Gagatsis added that the player wanted to remain active as a squad official.

June 15, 2007: Zagorakis announced his retirement from soccer while leading a bid to gather investment to take over the financially troubled Thessaloniki team.

August 22, 2007 Theo Zagorakis played his 120th and final game for Greece — a national record at that moment - in a friendly game against Spain (2-3) held in his honor at Toumba Stadium, Thessaloniki.

On November 1, 2006, Theo married Ioanna Lilli, a model, in a small church at Theo's place of birth, Lydia, Kavala). Vassilis Gagatsis, the federation boss, was the best man. Ioanna was on her seventh month of pregnancy. In 2017 their daughter Maria was born and in 2010 son Yiannis.