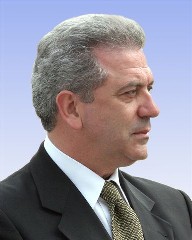 Dimitris Avramopoulos (Greek: Δημήτρης Αβραμόπουλος) is a Greek diplomat and politician, former mayor of Athens, member of the Hellenic Parliament and current Minister for National Defence.

Avramopoulos was born in Athens on June 6, 1953. He studied State Law and Political Sciences in the University of Athens, and continued his studies at the post-graduate level. After a short period of involvement as a member of the Communist Party of Greece - Interior (Greek: ΚΚΕ Εσωτερικού), a split of the Communist Party of Greece, he joined the Hellenic Ministry of Foreign Affairs Diplomatic Academy in 1980 and subsequently Greece's diplomatic corpus.

On June 21, 2012, he was named Minister for Foreign Affairs by Prime Minister Antonis Samaras. One year later, in a cabinet reshuffle, he was returned to his National Defence post.