Kóstas Karamanlís (Greek: Κώστας = Kostas, full name Κωνσταντίνος Αλεξάνδρου Καραμανλής = Konstantinos Alexandrou Karamanlis, (born September 14, 1956) is a Greek politician who became Prime Minister of Greece on March 10, 2004 following his party's victory in the March 7 parliamentary elections. He repeated his victory on September 16, 2007, though his majority in Parliament was reduced to a mere 152 (of 300) seats. He was decisively defeated on October 4, 2009 after a second term in office that was marred by rioting, scandals and economic difficulties. Karamanlis was the leader of the conservative New Democracy party which was founded by his uncle. 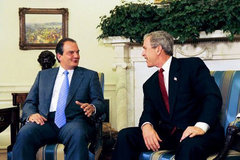 With US President, George W. Bush

Karamanlis, a nephew and namesake of the former President of the Hellenic Republic Constantine Karamanlis, was born in Athens and studied at Athens University's Law School and at the private Deree College, continuing with postgraduate studies in the Fletcher School of Law and Diplomacy Tufts University in the United States, where he gained a master's degree and a doctorate in political sciences, international relations and diplomatic history.

Karamanlis was a member of New Democracy's youth wing, ONNED, and served in ONNED's and New Democracy's organisational and ideological sectors from 1974 to 1979 and from 1984 to 1989. He also practised law between 1984 and 1989 and taught political science, diplomatic history and business law at Deree College. He is the author of Eleftherios Venizelos and Greece's Foreign Relations 1928-32. He has also edited and prefaced various historical publications.

Karamanlis was elected a New Democracy deputy for Thessaloniki in 1989, but in 2004 he was elected for Larisa. He was elected party leader in 1997 following New Democracy's defeat in the 1996 election. He narrowly failed to defeat the ruling Panhellenic Socialist Movement (PASOK) at the 2000 elections.

Karamanlis was the youngest ever Greek Prime Minister, and the first born after World War II. He married Natasa Pazaiti in 1998 and they have two children (a boy and a girl who are twins), born in 2003.