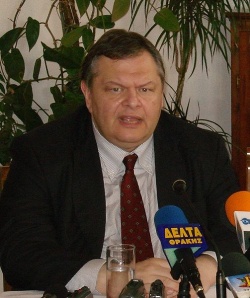 Evangelos Venizelos (Greek Ευάγγελος Βενιζέλος, born Thessaloniki January 1, 1957) is a Greek politician, formerly Minister for Culture, Minister for National Defence and Minister for Finance and currently Minister for Foreign Affairs. He is a member of the Greek Parliament for the Panhellenic Socialist Movement which he heads. In private life, he is a lawyer, professor and constitutional scholar.

Venizelos was first elected to Parliament in 1993 and has been re-elected ever since. He has served as Minister of Transportation, Minister of Justice, Minister of Development and Minister of Culture. He co-sponsored the 2001 amendments to the Greek constitution.

On November 11, 2007, Venizelos challenged Giorgos Papandreou for the PASOK party leadership but lost.

After Papandreou's electoral victory in October 2009, Venizelos was appointed Minister for National Defence.

In June 2011, he was moved to the Ministry for Finance and was also named as Deputy Prime Minister.

On March 18, 2012, he was elected leader of the Panhellenic Socialist Movement. After his party's poor showing in the general election of 2012, Venizelos joined the coalition government of New Democracy's Antonis Samaras. In June 2013, he was named Samaras' Minister for Foreign Affairs.

Venizelos is married to the former Lila Bakatselou. The couple have one daughter.

Despite the shared last name and initials, Evangelos bears no relation to the famous early twentieth-century Greek politician, Eleftherios Venizelos.