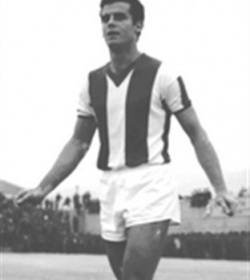 Stefanakos was also on the Olympiakos side that won the Balkan Cup in 1963, scoring the only goal in 87th minute of the final game against Levski Sofia.

He was capped 8 times by the Greek National Football Team.

Married to actress Martha Karayianni, Stefanakos developed a love for the cinema and the night life which contributed to his decline as a player. A very disappointing performance in the Cup Winners' Cup against West Ham United of England, was to be his last competitive game in Greece. Afterwards, he migrated to South Africa where he played for three years.

He tried his hand at acting and took part in eight films including: