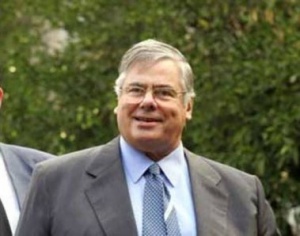 Ewert was born in Athens on May 12, 1939, the son of Angelos Ewert who, later, became Chief of Police. He studied economics at the University of Athens and joined EREN (the youth organisation of the National Radical Union, the conservative party in power at the time) in 1957 becoming its leader in 1963.

During the time of the military dictatorship (1967 - 1974), his activities were curtailed and he was forbidden to leave the country. After the restoration of democracy in July of 1974, Ewert joined New Democracy, the successor of the National Radical Union, and was elected under its banner to the Hellenic Parliament. He was continually re-elected until his retirement from politics in 2009. In October of 1986, he was elected Mayor of Athens resigning his seat in Parliament to assume office on December 20. He resigned as Mayor of Athens on May 3, 1989 in order to run for MP in the general election of June 1989.

Ewert became the Chairman of New Democracy on November 3, 1993 and kept the post until March 21, 1997 when he quit after a poor New Democracy showing in the general elections.

He died on February 9, 2011 at the Hippokratio Hospital in Athens after being hospitalized on January 6 and being treated for for breathing problems. He left behind a wife and two daughters.