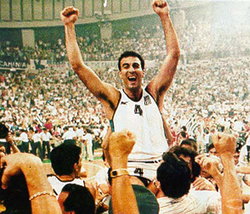 Nikos Galis was adored by the fans.

Nikos Galis (real name Nikos Georgalis, known to Seton Hall basketball aficionados as Nick Galis), often referred to as the Michael Jordan of Greece, is a Greek-American former basketball player, born in Union City, New Jersey, USA, on July 23, 1957. The child of a poor immigrant family from Rhodes, Galis was the fourth and last child, but was destined to become the best!

Following in his father's footsteps, Galis took up boxing in his early years, his father George Georgalis having been a very good boxer in his youth. Fearful of seeing him come home with his face covered in blood, his mother, Stella Georgali intervened to persuade him to take up something else. He didn't find rugby attractive, so he took up the other most popular sport in the New Jersey neighborhoods: basketball. In an interview for the magazine "Triponto" some years ago he said "In our neighborhood I would always play the older boys and beat them. I would rarely lose whether I was playing boys my own age or older!" 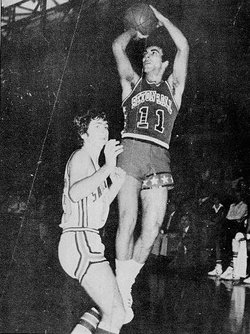 Galis in the NCAA

So, Galis enrolled in Union Hill High School and became a crucial and irreplaceable player. Important New York colleges began to show an interest in him, but Galis finally ended up with the Seton Hall Pirates. There, he got the shirt with number 11 and became a crucial player fairly quickly. But the lack of other good players prevented Galis' team from reaching any NCCA finals in the 4 years that he was playing there. In his fourth and final year, Galis, by now a shooting guard, saw his points average reach 27.5 and his name ranked third among the leading NCCA scorers, behind the great Larry Bird and Balder. When he left Seton Hall, his name was on nearly every record scoring list in the college. He currently ranks 11th all-time on SHU's scoring list with 1,651 points. He was the Haggerty Award winner in 1979.

In the spring of 1979 Galis realised that the time had come for him to try and play in the NBA. But this big plan was ruined by the whims of his manager, Bill Manon, who may have ruined Galis' career but surely all Greeks are now grateful to him. Bill Manon was the agent of a few basketball players but mostly actors and artists, etc. Among those was the famous Diana Ross who had just launched her solo career away from her band "The Supremes". 'Upside Down' became a big hit and the agent started making money hand over fist, neglecting his then 22 year old Greek basketball player. So, from the first round of drafts, Galis found himself in the fourth, number 68 over all, and was picked by the Boston Celtics who had already chosen Larry Bird and wanted Galis just to make up the numbers. Galis tried to stay in the NBA but at the worst possible moment an injury left him out for 2 weeks and on his return, he found his place had been taken by Henderson. 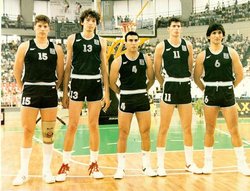 The 1987 national team; Nikos in the middle.

So he was forced to say goodbye to the NBA, but he would not have believed it if he had been told that soon after he would become famous in the land of his forefathers, where, as he admits now, he didn't even know they played basketball.

Galis' professional basketball career in Greece became the stuff of legend. In the 1987 Euro-basket championship, after Greece defeated Italy in the quarterfinal round, they asked Galis if this was the greatest moment in his career and he said "the greatest until tomorrow". In the semi-finals, Nikos Galis outscores Yugoslavian Drazen Petrovic 36 to 31 to put Greece in the finals. In the championship game he scores 40 to lead the Greek team over the USSR (final score 103-101), and set off a celebration that rivals any Athens has seen in its 3000 year history.

Galis continued playing competitive basketball until his late thirties. He turned Aris Thessaloniki into the "Emperor" of Greek Basketball leading them to one title after another in the Greek A1 Division. Later on he would ply his trade with Panathinaikos before retiring on account of a fight with his coach.

During his playing career, Galis played 168 times for the National Basketball Team of Greece scoring a total of 5,129 points and this makes him the #2 on Greece’s alltime topscorer list.

Today, he has a basketball camp in Chalkidiki, where he teaches the children how to play the game. He never tried to become a coach and has been rather quiet about his life. For years after he retired there were rumors he would could come back and save Aris but he never did.

On September 8, 2017, he was inducted into the Naismith Memorial Basketball Hall of Fame. 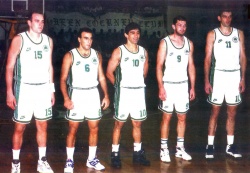 Nikos Galis with Panagiotis Giannakis in 1994 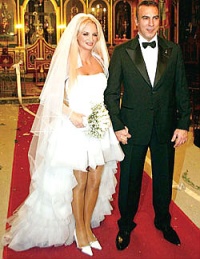 After retiring from basketball, Nikos Galis opened a camp for kids 6-16 years of age in Pefkohori, Kassandra, Chalkidiki.

On December 8, 2005, he married Eleni Panagiotou following a two and a half year affair. The couple recently had a child.

It was the second marriage for Galis, whose first wife, Jenny, died.