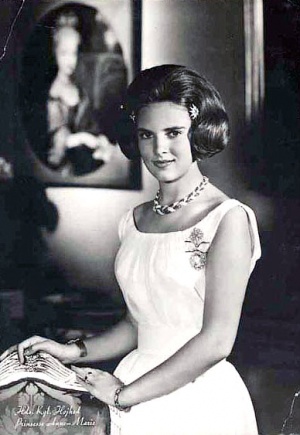 Her Majesty Queen Anne-Marie of Greece (born Amalienborg Palace, Copenhagen, Denmark, 30 August 1946) is the wife of former King Constantine II of Greece, who was deposed by a military coup in 1967. Properly, their titles were the King and Queen of the Hellenes, which is the country's official name, but this royal form is little used and rarely known.

Officially Greece remained a monarchy until 1973, when the military dictatorship then ruling Greece held a successful referendum on abolishing the monarchy. This referendum was repeated, with the same result, in 1974, following the re-introduction of democracy in Greece.

Born Princess Anne-Marie of Denmark, she is the youngest daughter of King Frederick IX of Denmark and his wife, the former Ingrid of Sweden. Her eldest sister succeeded their father as Queen Margrethe II of Denmark.

Titles from birth to death

Here is a list of titles Queen Anne-Marie held from birth in chronological order: