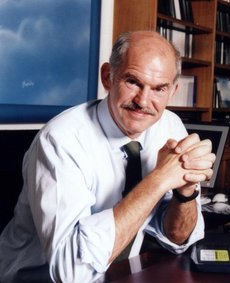 The son and grandson of Greek prime ministers, Papandreou became the leader of the Panhellenic Socialist Movement (PASOK) party in February 2004. On 7 March Papandreou led PASOK to defeat in the Greek national elections against New Democracy's Costas Karamanlis but on October 4, 2009, decisively won the rematch and was elected Prime Minister. 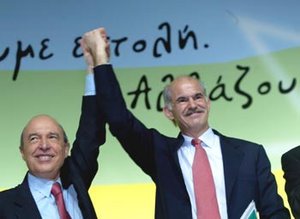 Papandreou remained the party's leader after his November 11, 2007 landslide victory against Evangelos Venizelos and Costas Skandalidis.

He led PASOK to a decisive victory in the parliamentary elections of October 4 2009, obtaining nearly 44% of the vote. He was sworn in as Prime Minister two days later.

During his term of office, Papandreou had to tackle a severe national debt crisis which led him to undertake many unpopular austerity measures. The Eurozone partners of Greece - most notably Germany and France - hammered out bail-out deals contingent upon even harsher austerity measures. On October 31, 2011, Papandreou - faced with continuous protests and ever-increasing unpopularity at home - announced that a referendum would be held on the latest bail-out deal achieved by Germany and France in Brussels, Belgium. His announcement backfired and, after intense criticism and mounting pressure, Papandreou resigned effective November 11, 2011.

Papandreou and his wife Ada (nee Papapanou) have a daughter, Margarita-Elena (born 1990) who currently attends the Athens College. Papandreou also has a son, Andreas (born 1982), from a previous marriage to Cypriot Evanthia Zissimides.