Timeline of Orthodoxy in Greece

This is a timeline of the presence of Orthodoxy in Greece. The history of Greece traditionally encompasses the study of the Greek people, the areas they ruled historically, as well as the territory now composing the modern state of Greece.

Christianity was first brought to the geographical area corresponding to modern Greece by the Apostle Paul, although the church’s apostolicity also rests upon St. Andrew who preached the gospel in Greece and suffered martyrdom in Patras, the Apostle Titus, Paul’s companion who preached the gospel in Crete where he became bishop, Apostle Philip (of the Twelve), who according to the tradition, visited and preached in Athens, Apostle Luke the Evangelist who was martyred in Thebes, Lazarus of Bethany, Bishop of Kition in Cyprus, and the Apostle John the Theologian who was exiled on the island of Patmos where he received the Book of Revelation recorded in the last book of the New Testament. In addition, the Theotokos is regarded as having visited the Holy Mountain (Mount Athos) in 49 AD according to tradition. Thus Greece became the first European area to accept the gospel of Jesus Christ. Towards the end of the 2nd century the early apostolic bishoprics had developed into metropolitan sees in the most important cities. Such were the sees of Thessaloniki, Corinth, Nicopolis, Philippi and Athens.

By the 4th century almost the entire Balkan peninsula constituted the Exarchate of Illyricum which was under the jurisdiction of the bishop of Rome. Illyricum was assigned to the jurisdiction of the patriarch of Constantinople by the emperor in 732. From then on the Church in Greece remained under Constantinople till the fall of the Byzantine empire to the Turks in 1453. As an integral part of the Ecumenical Patriarchate the church remained under its jurisdiction up to the time when Greece won her freedom from Turkish domination.[1] During the Ottoman occupation up to 6,000 Greek clergymen, ca. 100 Bishops, and 11 Patriarchs knew the Ottoman sword.[2]

The Greek War of Independence of 1821-28, while leading to the liberation of southern Greece from the Turkish yoke, created anomalies in ecclesiastical relations, and in 1850 the Endemousa Synod in Constantinople declared the Church of Greece autocephalous.

In the twentieth century during much of the period of communism, the Church of Greece saw itself as a guardian of Orthodoxy. It cherishes its place as the cradle of the primitive church and the Greek clergy are still present in the historic places of Istanbul and Jerusalem, and Cyprus.[3] The autocephalous Church of Greece is organised into 81 dioceses, however 35 of these are nominally under the jurisdiction of the Ecumenical Patriarchate of Constantinople but are administered as part of the Church of Greece (except for the dioceses of Crete, the Dodecanese, and Mount Athos which are under the direct jurisdiction of the Patriarchate of Constantinople).

The Archbishop of Athens and All Greece presides over both a standing synod of twelve metropolitans (six from the new territories and six from southern Greece), who participate in the synod in rotation and on an annual basis, and a synod of the hierarchy (in which all ruling metropolitans participate), which meets once a year.

The Byzantine Empire during its greatest territorial extent under Justinian. ca.550.

Byzantine Empire by 650; by this year it lost all of its southern provinces except the Exarchate of Carthage.

The Byzantine Empire at the accession of Leo III, ca.717. Striped area is land raided by the Arabs. 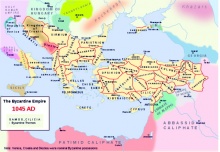 The Byzantine Empire and its themata in 1045. At this point, the Empire was the most powerful state in the Mediterranean.

The beginning of Frangokratia: the division of the Byzantine Empire after the Fourth Crusade. 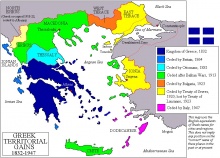 "The prevailing religion in Greece is that of the Eastern Orthodox Church of Christ. The Orthodox Church of Greece, acknowledging our Lord Jesus Christ as its head, is inseparably united in doctrine with the Great Church of Christ in Constantinople and with every other Church of Christ of the same doctrine, observing unwaveringly, as they do, the holy apostolic and synodal canons and sacred traditions. It is autocephalous and is administered by the Holy Synod of serving Bishops and the Permanent Holy Synod originating thereof and assembled as specified by the Statutory Charter of the Church in compliance with the provisions of the Patriarchal Tome of June 29, 1850 and the Synodal Act of September 4, 1928."[4]

Greece is the only Orthodox state in the world. The relationship between the Church and the State can be characterized as Sui generis, since there is no complete separation nor is there an established church. The Church is the State-Church. The role of the Orthodox Church in maintaining Greek ethnic and cultural identity during the 400 years of Ottoman rule has strengthened the bond between religion and government. Most Greeks, whether personally religious or not, revere and respect the Orthodox Christian faith, attend church and major feast days, and are emotionally attached to Orthodox Christianity as their "national" religion.

Names of the Greeks

The Greeks have been known by a number of different names throughout history. Their rise to great heights of power and lapse to near complete destruction were situations that were repeated more than once, which is perhaps why they are such a polyonymous people. The onset of every new historical era was accompanied by a new name, either completely new or old but forgotten, extracted from tradition or borrowed from foreigners. Every single one of them was significant in its own time. From ancient times to the present these included:

The Byzantine "themes" of Greece rebelled against the iconoclast emperor Leo III in 727 and attempted to set up their own emperor, although Leo defeated them. Up to this time Greece and the Aegean were still technically under the ecclesiastic authority of the Pope, but Leo also quarreled with the Papacy; the defiant attitude of Popes St. Gregory II and St. Gregory III of Rome, who summoned councils in Rome to anathematize and excommunicate the iconoclasts (730, 732) on behalf of image-veneration, led to a fierce quarrel with the emperor. Leo retaliated however by transferring the territories of southern Italy, Greece and the Aegean from the papal diocese to that of the the Patriarch of Constantinople, in effect throwing the Papacy out of the Empire.
Previously the lands which Leo ΙΙΙ now placed under the authority of the Church of Constantinople, although subject to the civil rule of the emperor of Constantinople ever since the end of 395, had nevertheless depended upon Rome ecclesiastically, except for a few brief interruptions including:

The Diocese of Moesiae (later split into two dioceses: the Diocese of Macedonia and the Diocese of Dacia) was the area known as "Eastern Illyricum", and in view of the detailed list of provinces given by Pope Nicholas Ι (858-67) in a letter in which he demanded the retrocession of the churches removed from papal jurisdiction in 732-33, this area seems to have been the region affected by Emperor Leo's punitive action.