From Phantis
(Redirected from AEK F.C.)
Jump to navigation Jump to search

A group of refugees that came to Athens in 1922 had a great desire to keep their home-land tradition going by creating on April 13, 1924 the Athlitiki Enosis Konstantinoupoleos (AEK) soccer club. This was not the rebirth of one of the clubs that used to be in Constantinople (now Istanbul) but a brand new team. The reason that this team was formed was to keep tradition going, as well as to keep all the Constantinople refugees united.

This new club created by these refugees not only grew strong roots and followers from Constantinople but throughout Greece as well. Since its inception the club has always been a contender in the Greek soccer championship. The individuals responsible for creating AEK were Aimilios and Menelaos Ionas, and Kostas Dimopoulos who had sports stores in Athens. It was in these stores that young people from Constantinople used to gather and throw out ideas of creating a soccer club.

It was on 13th April 1924 night that the Ionas brothers, Kostas Dimopoulos, Miltos Ieremiadis, Timoleon Tagaris, Menelaos Karotseris, Paulos Kehayas, and Kostas Spanoudis (a man that worshipped sports) made the decision to create a soccer club. The name was to be Athlitiki Enosis Konstantinoupoleos, it's crest was to be the Byzantine "two-headed eagle", and the colors of the team yellow and black. 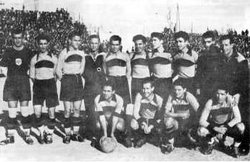 The first board of directors was comprised of Kostas Spanoudis (President), Nikos Eleopoulos (Vice President), Kostas Dimopoulos (General Secretary), Timoleon Tagaris (Treasurer), and Menelaos Karotseris and Miltos Ieremiadis (board members). These were the beginning stages for the soon to be club that would unite all the Greeks from Constantinople, Asia Minor and from all parts of the country.

The first team consisted from Kitsios, M. Ieremiadis, Asderis, Kehayas, Paraskevas, Dimopoulos, Karagiannidis, Baltas, Milas, Iliadis, and Georgiadis. One of the first hurdles that AEK encountered was the absence of a soccer pitch. In the first days of the club the players used to have practice at the grounds of the Zeus Temple but later they were invited to use the Panathinaikos stadium.

In November 1924, AEK played it's first game against Aias Athens and won 2-0.

In 1928, AEK joined Panathinaikos and Olympiakos in their dispute with the Hellenic Football Federation (EPO) and did not participate in the first official Greek football championship.

By 1929, the dispute was resolved. AEK won their first title in 1932: the very first Greek Football Cup ever contested. By the late 1930s, AEK became a powerhouse winning two consecutive league titles (1939, 1940) and became the first Greek club to win the domestic double in 1939.

World War II brought AEK's streak to an end, however the war did not affect their squad, unlike Olympiakos and Panathinaikos who lost players either in the war itself or the civil disturbances that followed it commencing in December, 1944 (Dekemvriana). During the German occupation of the country, AEK won two unofficial titles in 1941 and 1943. Yet, the late 1940s and the 1950s were dry years for AEK league-wise. Success was limited to winning the Greek Cup in 1949, 1950 and 1956.

1930s superstar, Kleanthis Maropoulos retired in the late 1940s but a new name arrived in Nea Filadelfia in 1957: Kostas Nestoridis.

Led by "Nestoras", AEK came within a whisker of winning the first Greek national title in 1960: with just one game remaining, they were two points ahead of Panathinaikos. However, disaster struck as they lost to Panionios to finish even on points with Panathinaikos. The one-game playoff was won by the greens 2-1, leaving AEK supporters with very bitter memories of what might have been.

The 1963 season started with a new coach at AEK's helm - German-based Hungarian Jeno Csaknady - and a young forward from Veria on the roster - Mimis Papaioannou. Panathinaikos seemed poised to repeat their achievement of winning the previous national championships, when, in a reversal of 1960, they unexpectedly lost 4-2 to Ethnikos Piraeus and finished the season even on points with AEK, with the yellow-black club having the advantage in goal differential. AEK led the one-game playoff 3-1 only to be equalised 3-3. A fourth Panathinaikos goal was disallowed and AEK were champions once more after a drought of 20 years. Csaknady left but returned, once more, to lead AEK to the championship in 1968. During the 1960s, AEK was awarded the Greek Cup in 1964 and 1966, both times without playing a final game. 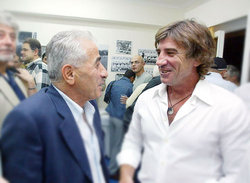 Mimis Papaioannou and Thomas Mavros at a more recent date.

In 1969 AEK became the first Greek football club that reached the quarter-final of European Champions Cup.

Coached by Branko Stankovic and led by Papaioannou, AEK managed to win the national title in 1971. That same year, a 17-year old lad broke into the regular lineup of the second-place finisher Panionios. He would, in time, tie his name with the decade that AEK supporters remember fondly. His name: Thomas Mavros. In 1974, Loukas Barlos, an Aris supporter from Thessaloniki, assumed the Presidency of the club. He hired Frantisek Fadrhonc to replace Stankovic as coach and staffed AEK's roster with such talent as: Mavros, Dedes, Skrekis and the Intzoglou brothers from Panionios, speedster Christos Ardizoglou from Apollon Athens, Nikoloudis from Iraklis and Dusan Bajevic from abroad. In 1977, Barlos' investments paid off handsomely in Europe as AEK reached the semi-finals of the UEFA Cup (being the unique Greek football club having achieved this record), eliminating Dynamo Moscow (2-0,1-2), Derby County (2-0,3-2), Red Star (2-0,1-3) and Queens Park Rangers (0-3,3-0 and 7-6 on penalty-kicks). The next two years would see AEK win 2 Greek championships, 1 double and another one time to be cup-finalist.

The latter title came in the first year of the reign of AEK's former striker, Dusan Bajevic, as coach. More would follow...

AEK won the Greek Football Cup in 2000 (by besting Ionikos 3-0 at OAKA) and 2002 (by defeating Olympiakos 2-1, also at OAKA). They also became the first Greek football club to reach the fourth round of the UEFA Cup in three consecutive seasons (2001, 2002, 2003). In addition, AEK became the only Greek football club that participated in the group stage of the Champions' League (2002-2003) without losing a single game (0-0 and 1-1 with Genk, 3-3 and 2-2 with Real Madrid and 0-0 and 1-1 with Roma). In 2006-2007, AEK participated in the group stage of Champions League for the 3rd time in the last 5 years, having defeated Hearts (in the third qualifying round) two times (2-1 in Scotland and 3-0 at OAKA). In the group stage, AEK beat Milan 1-0 and Lille 1-0 at OAKA and took another 2 points from Anderlecht (1-1 at OAKA and 2-2 in Belgium). In (2007-2008), AEK advanced to the third round of the UEFA Cup before being eliminated by Getafe. AEK supporters consoled themselves for the loss of the League title with the thought that their club won the most points on the pitch and would have finished Champions had not Olympiakos been awarded a victory on paper over Apollon Kalamaria.

In 2013 the club was relegated for the first time for disciplinary reasons forcing them to compete in Football league but as the club was declared bankrupt AEK started from scratch on the third tier. After two consecutive promotions the club returned to the Super League in 2015. In 2018 the club was crowned champion of Greece after a controversial season and game in Thessaloniki against PAOK

The lyrics[1] to the official anthem were writen by Christos Kolokotronis, music by Stelios Kazantzidis and it was first performed by Mimis Papaioannou.The latest anthem was written by Lefteris Papadopoulos (composer and an AEK fanatic), music by Christos Nikolopoulos and performed by Yannis Frangoulis. The new anthem was broadcasted for the first time on the 2nd of August 1995.